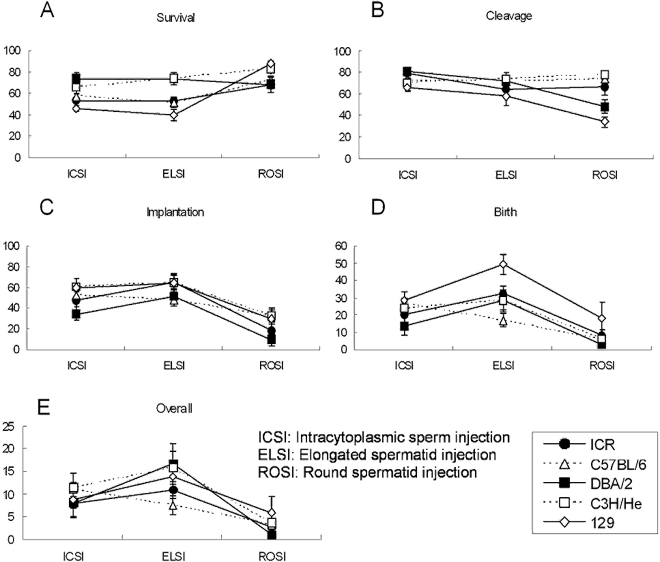 Intracytoplasmic sperm injection (ICSI or microinsemination as a broad term) has been used to study the mechanisms of mammalian fertilization and to rescue male-factor infertility in humans and animals. ICSI in mice has already been widely employed in many laboratories because of its consistent fecundity, even in the case of inadequate sperm cryopreservation, whole body freezing, or failure in spermiogenesis. We have examined what biological or technical factors may affect the outcome of mouse ICSI. We used a 5x3x2 factorial design with the following factors: mouse genotype (ICR, C57BL/6, DBA/2, C3H/He, and 129/Sv strains), type of male germ cells (epididymal sperm, elongated or round spermatids), and their freeze?thawing treatment. The type of male germ cells affected all the four parameters observed: oocyte survival after injection, cleavage of oocytes, implantation, and birth of offspring. Genotype affected the oocyte survival, cleavage and birth rates, whereas freeze?thawing had no effects on any of the parameters. Spermatozoa and elongated spermatids gave better implantation and birth rates than did round spermatids, while spermatozoa and elongated spermatozoa were indistinguishable in their ability to support embryonic development.
(Bioresource Engineering Division, RIKEN BRC)